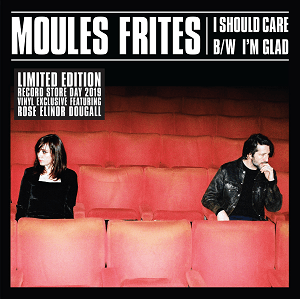 Moules Frites is perhaps the inevitable denouement for two ‘seasoned’ musicians, Rose Elinor Dougall and Louis Eliot. After a brief and ultimately disastrous stint on various European cruise ships, (erasing memories of that final performance aboard the Plymouth to Santander back in 2009, has proved difficult for the few unfortunate witnesses), the unlikely pair retreated to the studio, to produce what was intended as their opus magi, a work of unparalleled ambition and genius. A decade later that somewhat unwieldy project is apparently ‘still cooking’ according to Eliot, so in the meantime they have offered up a couple of stripped back versions of two of their favourite songs from the old set. Recorded to tape, late at night, at Vacant TV Studios by cohort Euan Hinshelwood, these tracks are intended as an homage to two of the greats, Julie London and Barney Kessel. These songs are best known performed by Julie London Limited to 500 Copies worldwide on 10” Vinyl